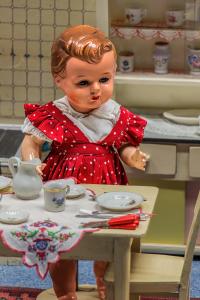 The mother reaches across the table to take the bowl of peas from the father.

How was work today?

She knows how he will answer but feels obliged to ask anyway.

The father tears his biscuit in half and butters it aggressively.

Her daughter is pushing mash potatoes around in circles with her fingers, smearing the gravy into a smiley face.

They lay off half the workforce then want everything done twice as fast. They don’t care that we’re working round the clock already or that those of us that are left are stuck doing everything…I hate it there.

The mother feels the familiar knot in her stomach at his words. She responds as she always does.

Well, just be thankful you still have a job.

The father takes a bite of chicken, reaches for the salt and pepper shakers with both hands and douses the food.

I’d quit if I could.

The mother watches him over-season the chicken while she chews, swallows, sighs.

Well, you can’t. Coby! If I have to tell you one more time…!

The kids are at each other again. Their seats are too close together. The formal table is too small without its leaves, stuck into the corner of the eat-in kitchen, and her son is growing so quickly.

I know that. But if I could…

The father looks down at his plate, dissatisfied. He pushes peas, potatoes and chicken together on the fork and shoves the food into his mouth with a frown. Coby fidgets in his chair, his foot tapping under the table, which is too low for his legs. He is lanky and nervous. He looks at his father.

The mother worries about her son. He’s in constant motion these days, it seems. And he’s growing so.

Chew with your mouth closed.

Coby stuffs a forkful of chicken into his mouth, swallows it whole and washes it down with a sip of milk. His father puts down his fork and wipes his mouth.

What does Jarrod’s dad do?

The mother glances at the father and corrects her son.

Well, they live in a mansion, anyway. Jarrod’s got a swimming pool and a rec room and his own TV and computer upstairs, plus an X-Box.

She can feel the tension rising at the table.

It’s not a mansion, Coby. It’s just a big house.

Well, it’s a hundred times bigger than this one, at least.

Can we get an X-Box? Everybody at school has one. Everyone but me.

The father’s cheeks are red, and the mother wants to make this conversation go away.

Put it on your Christmas list. We’ll see. Now eat your chicken.

Chew with your mouth closed.

How much do you make, Dad?

The mother feels it coming. She glances at the father, stooped over his plate, pushing at the over-seasoned chicken, peas and potatoes.

No, you’re not. You’re talking.

The little girl stretches her elbows theatrically as she saws a bite of chicken on her plate. Her brother shoves her arm out of his face and gives her a threatening look before turning back to his father.

Chew with your mouth closed. And stop tipping your chair back, Boo. Sit up like a lady, please, and eat your dinner.

She cannot stop it. Mutiny is taking place at the table once again. The children sense her anxiety, the father’s rising temper. The children are in control. Their fingers hover over an invisible button.

How much money do you make, Daddy?

The boy locks eyes with his father—daring him to answer.

The father holds his son’s gaze across the table. The mother looks from one to the other. She picks up the platter of mash potatoes, stands, walks to the father’s plate and drops another large spoonful onto his plate.

It’s none of your business how much money your father makes, Coby. He makes enough to take care of our needs…mostly. But it’s not a polite question. Just eat your dinner.

The boy tears off a piece of buttered biscuit and shoves it into his mouth.

Sit up. And chew with your mouth closed.

The boy closes his mouth. The father douses his mash potatoes in gravy and pepper. The table returns to silence. The mother’s pulse slows. Clinking glasses, scraping forks, a dog barking in the neighbor’s yard outside, then…

I don’t see why it matters to you how much money your father makes. It’s really none of your business. And why on earth do your friends all go around talking about how much money their parents make? It’s a ridiculous subject for children to be discussing at school.

The mother wants to talk about other things—the neighbor across the street whose teenage daughter was arrested for drunk driving this weekend. Now, there’s someone who’s got problems! The call. She forgot about the call. She meant to discuss the call with the father. Her son will not stop.

Why is it a secret?

I didn’t say it was a secret—just not something that you need to be concerned with. Now eat your dinner, and not another word.

The family eats in silence. The air is heavy between them. The father wheezes softly when he breathes. The girl  smirks at the boy. He squints at her.

Boo, stop kicking your brother under the table. I can see you. Leave him alone.

The mother looks at the father. His plate is empty. He bites the inside of his cheek.

He passes his plate to her. She drops two spoonfuls onto it and dribbles the gravy on top.

So…I hate to bring it up, but I got another call from you-know-who today about you-know-what…Any word on when we might be able to…you know?

The father looks at her, confused.

Oh, please. Don’t look at me like you have no idea what I’m talking about. Do I need to speak pig-Latin? I got a call from YOU-KNOW-WHO about the YOU-KNOW-WHAT. When can we…you know?

His expression changes from bewilderment to agitation. Why must she always bring up bad news at the table, in front of the children? If she’d just wait until later, when they were alone, after the children were in bed, she would not feel it necessary to speak in code.

The daughter has been watching the exchange between her parents like a tennis match, her head moving from side to side. She looks at her brother. He rolls his eyes. She giggles.

Stop laughing, Boo. This doesn’t concern you. Eat your peas.

She pulls her chair closer to the dining table and sugars her tea.

Well, how about next time the YOU-KNOW-WHO calls, I give them your number at the office, and you can tell them whatever the YOU-KNOW-WHAT you like. I’m sick of always being the one with egg on my face.

The girl laughs through her nose, and some of the milk she has just swallowed comes out of her left nostril. This sends her and her brother into a fit of snorts and giggles. Her mother slams the lid onto the sugar bowl and stirs her tea noisily.

What’s so funny? You think our conversation is funny? Mind your own business, please.

Holy shit…I mean crap, Boo. What did you DO?

Her daughter’s face is now covered with mashed potatoes. A thick blob of gravy drips from the tip of her nose into her plate. The father slams his fist on the table and pushes his plate away.

That’s it. A man comes home from a long day at the office, and all he wants to do is sit down, relax and have a nice dinner with his family, but what do I get? Huh? Interrogated by my son, bitched at by my wife, and now I have to watch my daughter smear potatoes all over her face? That is disgusting, Boo. Go wash yourself in the bathroom. Wasting perfectly good food. Did you think we would find that amusing? What got into you?

The little girl stops giggling. Her smile freezes between the clumps of potatoes. She looks at her brother for approval, but he just shakes his head, somber and worried. She looks at her mother for comfort, but her mother is glaring at her father. She sniffs and her bottom lip quivers as she fights back tears.

You don’t have to shout, you know. The neighbors will hear you. Oh, it’s okay, Boo. Daddy isn’t mad at you. Just go clean yourself up, then come back to the table, and I’ll give you some more potatoes.

The little girl uses her napkin to wipe the potatoes off her face and studies the kitchen floor tiles as she passes her father on the way to the hallway.

How come she never gets in trouble for doing stupid stuff but I get yelled at for everything?!

Eat your peas, Coby, and hush. She’s younger than you. She’s just trying to get attention. Be quiet and eat.

Chew with your mouth closed, please.

The father belches acid, pats his shirt pockets, then his pants pockets. Nothing. He pushes his chair away from the table.

I’m out of Rolaids.

There’s a bottle in the bathroom cabinet.

His daughter slams the bathroom door.

I need to get out of this house.

You think I don’t? Eat your supper.

Go to your room.

The boy scoots his chair away from the table and stomps up the staircase to his room, then slams his door. The father stands.

He slams the front door on his way out of the house.

The mother looks at the empty chairs. She hears the engine rev outside and the sound of spinning tires on gravel. She chews the corner of her biscuit, sips her sweet tea and pushes a pea around on her plate with the edge of her fork.

Boo, come back to the table.

Her daughter’s voice behind the bathroom door is small, but defiant.

Fine. But don’t complain that you’re hungry when it’s bedtime. This is supper. This is it. Boo? Boo?

The girl does not answer. The father is gone. The boy is gone. The mother stands up and scrapes the food from the plates into a serving platter.She makes kissy noises to call the dog.

She places the platter on the floor.

The dog wags his tail. He is happy.

Helpful and Informative Articles by ME!